Hydro Jetting - What You Need To Know About This Powerful Method

Smiley Drain additionally provides hydro jetting services to sanitize your drains. This Eco-friendly method of drain cleaning calls for no chemicals. High-pressure water eliminates dirt, debris, and build-up that is clogging your drains. If you want to intend to get all of the small blockages out of your drain, you can use hydro-jetting to clean every variation and turn of your pipes.

Smiley Drain will then use a vacuum to suck all of the debris out of your system, leaving you with clean pipes that will no longer be clogged or continue to corrode.

What is Hydro Jetting?

Hydro jetting is a method that's very effective at cleaning sewer lines and drains. The process makes use of a specialized machine that comes with a water tank and hoses. The most astonishing part of the equipment is the ability to blast water at 4,000 PSI for most sewer line jetters or 1,500 PSI for most kitchen jetters.

Hydro Jetting is effective for interior and exterior drains and Smiley Drain is here to assist you before your plumbing becomes a hazardous situation. Hydro jetting is a method used by qualified plumbing contractors to clear clogged or slow sewage lines. A gust of water at high pressure is sent into the lines that will usually clear away blockages and enhance drain flow.

Hydro jetting is one of the most frequently used forms of pressurized drain cleaning. , that it's almost synonymous with the service. Our hydro-jetting tools have a unique multi-directional nozzle that jets water with a pressure of over 4000 pounds per square inch. The nozzle is also attached to a water hose which allows cleaning well below the surface in most home and commercial residencies. The force of the water is strong enough that damage can occur inappropriately utilized. Our technicians are highly trained in effectively using hydro jetting technology.

Hydro jetting provides a number of advantages using pressurized drain cleaning systems. For instance, hydro jetting flushes out years of heavy mineral and waste buildup in minutes, rejuvenating the inside of the pipe. There is no leftover debris, grease, oils, or stuck-on waste. Pipes cleaned with hydro jetting typically stay clean much longer and work better over time.

When Is Hydro Jetting Recommended?

Having said that, there are other scenarios in which hydro-jetting is an excellent initial option. Commercial preventative maintenance and epoxy relining preparation are good examples of such scenarios.

What Are The Advantages Of Hydro Jetting?

Hydro jetting offers plenty of advantages, and below are only a few of the crucial ones.

Because of the high-pressure water, cleaning or clearing a drain becomes incredibly fast.

Hydro-jetting can be used on most, if not all, kinds of plumbing pipes.

With hydro jetting, you are not just clearing the clogs. You are also cleaning the pipes from built-up minerals from water, grease, oil, soap scum, and other undesirables. As a result, the pipes will be cleaner, and clogging won't be an issue anytime soon after the hydro jetting process is done.

Is Hydro & Water Jetting Safe to Use? 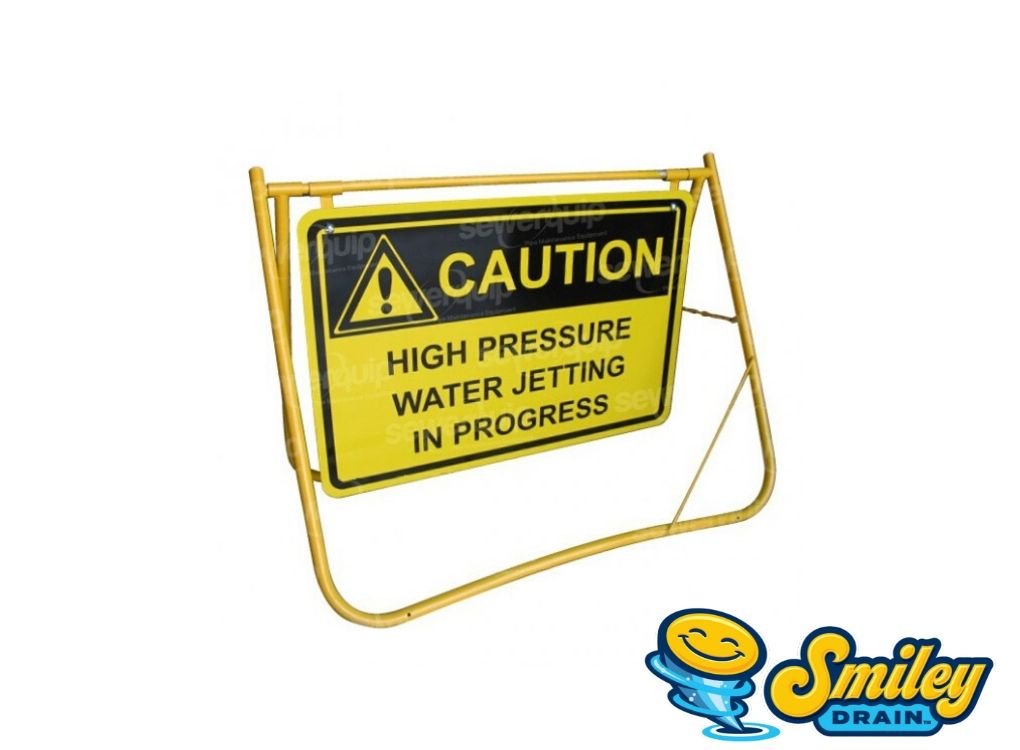 Also, some guidelines must be followed. For example, hydro jetting is not recommended for deteriorating or frail pipes. Depending on the severity of the problem, the pipes may get damaged due to the machine's blasting power. To be fair, even the snaking method can damage pipes that are already in poor condition.

As mentioned above, hydro jetting is a versatile process that has a wide array of uses. Thus, the examples listed below are only some of the popular applications of hydro jetting.

Hydro jetting is often used to clean main sewer lines entirely from roots intrusions, heavy grease build-up, and scale build-up. It's a method that is especially recommended for commercial restaurants, in which excessive grease build-up is a common thing. Even for commercial establishments that seemingly don't use plenty of oil, the regular pouring of grease into the drain will eventually lead to clogs. Furthermore, the water blasting effect will return the pipes into their optimal conditions.

Hydro jetting is perhaps the best method for removing clogs and build-ups in the kitchen pipelines. As mentioned above, it's still recommended that you initially try the snaking method as it's the more cost-efficient option. For most contractors, a snake tool is sent down the drain to try to clear the clog. If the build-up is too much or the snake tool isn't enough to tackle the job, then the hydro jetter comes into play.

In most cases, plumbing contractors will use a kitchen jetter. It's a smaller version but still powerful enough to clear kitchen pipes. Also, the smaller scale allows it to fit into the two-inch drain pipes of most kitchens. A kitchen jetter is effective at restoring the full diameter of the kitchen pipes. Years of oil, fat, and grease build-up are simply blasted away. Another advantage of hydro-jetting service is most contractors will offer a longer guarantee as it is really effective at clearing the pipes. As a homeowner, you can also minimize pipe cleaning costs by removing the grease and oil before it reaches the sink.

When doing an epoxy relining, the best results usually come after the surfaces are immaculate. It's the reason why the hydro jetting is often used to prepare the surfaces because of its potent blasting and cleaning action.

Area drains, or also known as landscaping drains, is responsible for handling the stormwater run-off. Because of such, area drains are prone to clogging due to the build-up of leaves, rocks, debris, dirt, and other elements. The problem only aggravates during the winter, and a snake tool is often not enough to clear the debris and clog. The excellent thing about a hydro jetting machine is it's powerful enough to clear the area drains from natural and other elements that could cause a blockage.

Commercial properties often experience an influx of people that naturally uses the facilities. Thus, it's only a matter of time that a back-up due to clogs is going to happen. However, unlike in a residential setting where a clog will only cause an inconvenience most of the time, a commercial establishment may likely suffer profit loss at the present and future. Hence, hydro jetting is often done as a preventive measure to ensure a smooth day-to-day operation. 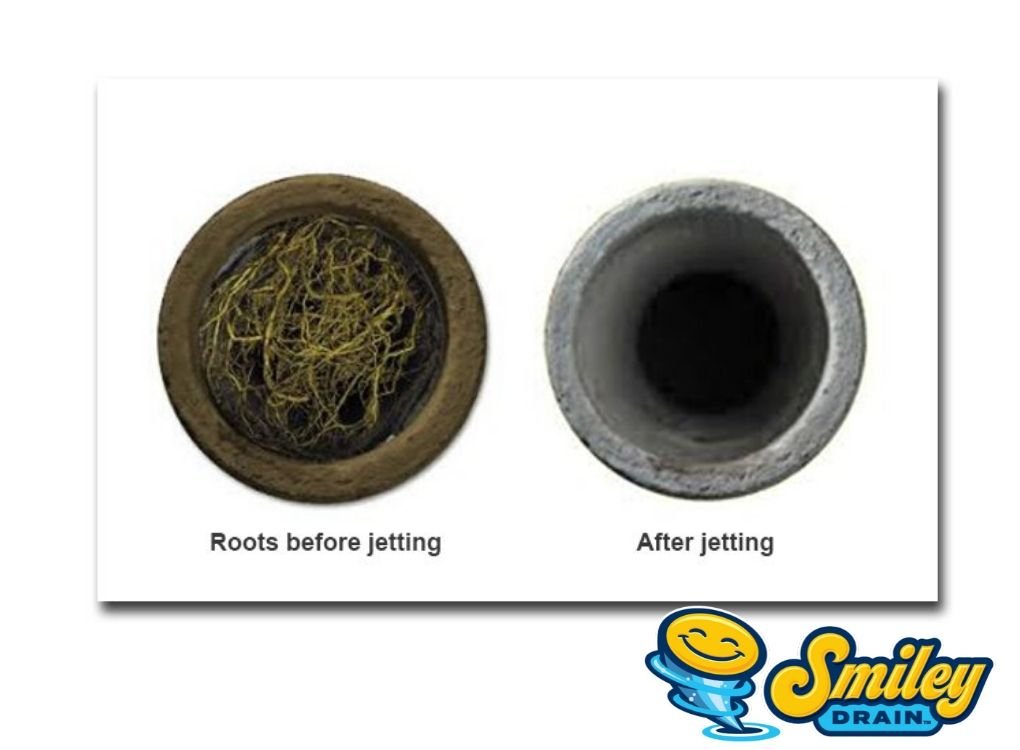 When you have your pipes cleaned with hydro jetting by Smiley Drain, you enjoy many long-term benefits that might not be obvious but have been consistently seen by our customers. The greatest common one is improved sewer flow in older homes and industrial structures. With the pipes instantly returned to flawless conditions, sewage and waste drain out swiftly and easily. You won't have to wait minutes while your sink drains or your tub empties, leaving a messy residue.

Hydro jetting additionally minimize the incidents of drain clogs entirely. As mineral accumulation and waste build up inside the pipes, it requires less and less material to embed the narrowing pipe. Often, a severe buildup of hard water scale results in nearly daily toilet clogs and sink backups. Instead of dealing with the reoccurring blockages, you can have Smiley Drain clean your drains. We will reopen the pipe so that more material can pass through unobstructed. You'll rarely need to manage drain blockages, which not only saves your time but ultimately your money.

Keep in mind that it is necessary to always pick a professional drain cleaning service provider such as Smiley Drain for your hydro jetting solution. Our expert plumbers have executed thousands of drain cleaning services and we have the tools and expertise to not only fix your drainage problems but keep your pipes working properly long into the future.

Hydro jetting is a powerful process that can eliminate blockages and bring the pipe's diameter to its original form. If you want to know more about the process, then you can contact Smiley Drain. In fact, why don't you call them right now and ask them how they can help you with any of your plumbing-related problems. (973) 764-5393

Can Hydro-Jetting Cause Damage to Pipes?

Hydro jetting will not cause any damage to your pipes when it is done by professional technicians such as "Smiley Drain".

We use no chemicals, only water is used, it is an eco-friendly way to clean out your pipes while being respectful to the environment.

What does Hydro Jetting Mean?

Hydro jetting is a method that's very effective at cleaning sewer lines and drains. The process makes use of a specialized machine that comes with a water tank and hoses. The most astonishing part of the equipment is the ability to blast water at 4,000 PSI for most sewer line jetters or 1,500 PSI for most kitchen jetters.

How Often Should You Hydro-Jet?

How Often Should You Have Your Sewer Lines Cleaned?

As a good preventive measure, you should have your sewer lines cleaned every 18-24 months. Unless you are experiencing problems more often than that, you may need to call a plumber and schedule a video inspection of your pipes.

Can You Hydro-Jet a Toliet?

Hydro jetting is a solution that's best when clogs can't be removed using a traditional plumbing snake. Including heavy sludge, grease that has built up over time, or even tree roots. Plumbing snakes are ideal for slow-draining lines or to remove occasional blockages, such as too much toilet paper, hygiene products, and food stuck in your sink drain.